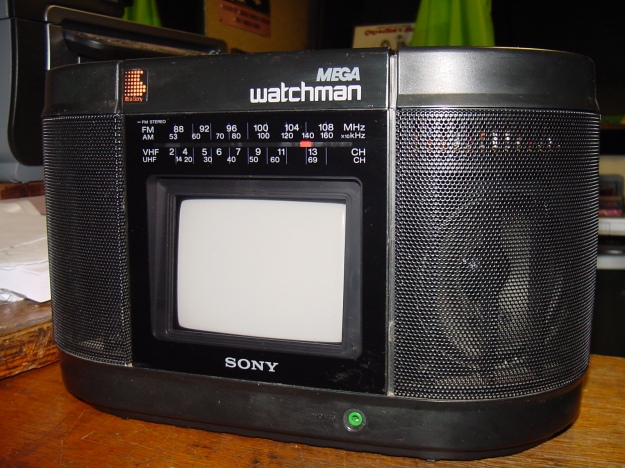 Lookit this cool beast! It’s Sony’s Mega Watchman FD-555! This is early-1990’s technology at its best. Not only do we have a TV and AM/FM radio, but also a cassette player. The large speakers and the presence of a surround sound button make it clear: this ain’t no regular radio! This sucker is a legit boom box! And if it’s not, it certainly aspires to be!

This guy is kinda sorta similar to the Panasonic Desktop TV/Clock Radio I reviewed back in September. I had this Watchman loooong before I had the Panasonic, but I think I like the Panasonic more: it’s older, it has a cool mirrored clock thing, and fake woodgrain, all aspects that fill me with glee. The Panasonic gives the impression of something a businessperson, college student, or high school kid would keep on his/her desk and turn on during late night whatever sessions. This Sony Watchman, on the other hand, feels like something that should be used in the garage while someone works on a car, which is unfortunate in my case, because me working on a car is recipe for total carnage and/or bloody tragedy. On the other hand, being from the sweet spot of the early-90’s, 1991, this Mega Watchman also seems like it’s well-suited to being carried down the street, blaring the latest smash hit single on cassette tape, while you and your backwards-hat-wearing hoodlum friends look for shenanigans to cause. And when you were done creating a ruckus, you could watch Blossom.

The flash on my camera illuminates every lil’ thing I thought I had cleaned off. Aside from dust in some of the crevices and sticker residue that refuses to leave the top of the cassette player, this thing is actually pretty clean, honest! I love the sleek look and black coloring, and the presence of the old “It’s a Sony” logo is always the mark of something I want to hug.

Oddly enough, there’s no clock anywhere on it. A digital clock somewhere seems like it couldn’t have been too hard to add, but I guess the ability to tell time had to be sacrificed in order for you to listen to the Too Legit To Quit cassette whenever you wanted.

The back. I forgot to take a picture with the handle extended, but I’m sure you can imagine how that works. There’s a  few various ports, including one for an external antenna, as well as vertical hold controls. The cord can be unplugged from the unit and eight size-D batteries (a bottom-compartment, which I also forgot to take a picture of) used instead, which is helpful, because otherwise, the whole “portable” motif would fly right into the toilet. There’s also a port for a DC adapter, which seems a bit superfluous since you already have a plug and the ability to take batteries, but I guess they wanted their bases covered. 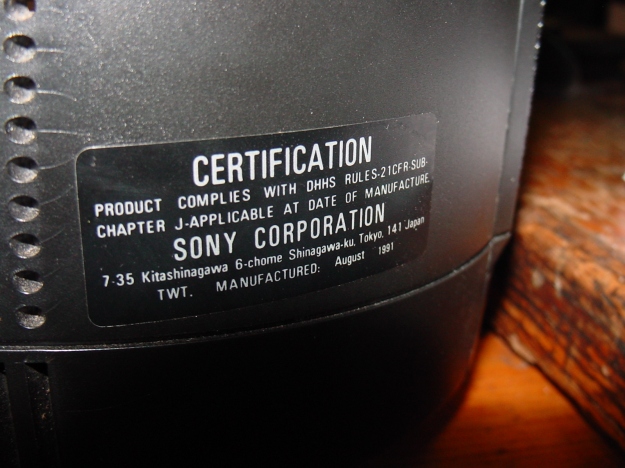 August 1991; I was all of five years old! The early-90’s are at the tail-end of my personal preferred electronics-picking period. Don’t get me wrong, I’ll buy anything if I find it interesting (and cheap enough), but I generally want the things from the early-1990’s (1990-1993) on down, and particularly the stuff from the 1980’s or before.

That said, with the rounded curves, big ol’ speakers and revolutionary surround sound technology, this is certainly a nice example of early-90’s electronics, and it probably wasn’t cheap, either. I’m not saying it would set you back too much, provided you weren’t only relying on allowance or grass-cutting funds, but I’m guessing it wasn’t a budget item, either.

The TV (and radio) both work perfectly. Since everything is digital now, it goes without saying that I’m not actually picking up any TV channels. I suppose if you took advantage of the external antenna jack, you might be able to rig this thing to play real television, but I really have no idea, and while I like my Sony Watchman, I’m not that interested in going to extreme lengths to make it “go.” 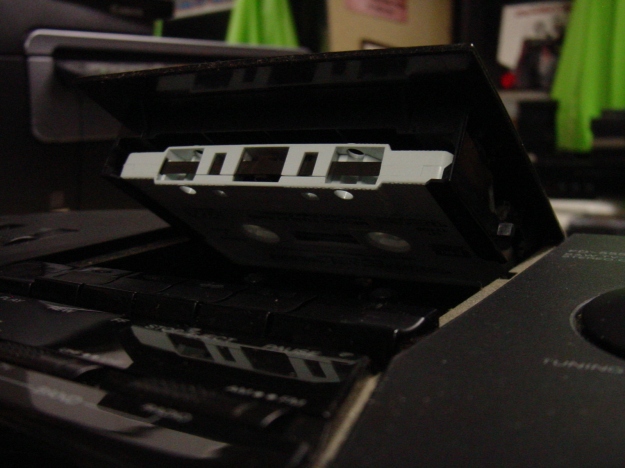 I’ve had this unit for years, and while I tested the radio and TV functions when I got it (at least I guess I did, it’s been awhile), I had no idea if the cassette player worked until today when I decided to do this review. Now, the old GE clock-radio by my bed has a cassette player, and for quite awhile I liked to fall asleep to certain tapes. Unfortunately, the player died, leaving me at the mercy of the radio. That being as it is, provided this Watchman’s cassette player works (he typed as if he didn’t know the outcome already), I could conceivably haul this thing upstairs and once again fall asleep to The Ghost Of Tom Joad. I probably won’t, but I could.

I grabbed a few cassettes laying around for testing purposes. The first one I put in was Billy Joel’s The Stranger, not so much because I had a burning desire to listen to an album I also own on other, better formats, but rather because if the Watchman ate the tape, I wouldn’t be upset. Sorry Billy, I like you, but when it comes to Mega Watchman-testin’, you’re expendable.

To my everlasting joy, the cassette player works! Like a champ! I’m not all that surprised though, Sony has always put out a quality product; it’s one of my more trusted brands when it comes to old electronics like this. However, the sound of the cassette was insanely muffled. Had the tape been played into the ground, or was the cassette player itself at fault? Further testing was required.

Next up: Bruce Springsteen’s The River, which is in my top ten all-time favorite albums. This put my fears to rest, because the sound quality was much better. A little spotty, someone obviously played the tape quite a bit (as well they should), but the difference in sound quality was very evident. This means I can old school party to “Sherry Darling” whenever I like!

Still not satisfied, I decided on one last test: The Michael Stanley Band’s You Can’t Fight Fashion. This is an XDR (Expanded Dynanic Range) cassette, and man, the sound quality was terrific, this Watchman is capable of producing some great sound output! One of the benefits of being a Northeast Ohioan is that we’ve got our hometown hero, Michael Stanley, and Fashion is right up there with Heartland as one of my favorite MSB albums. 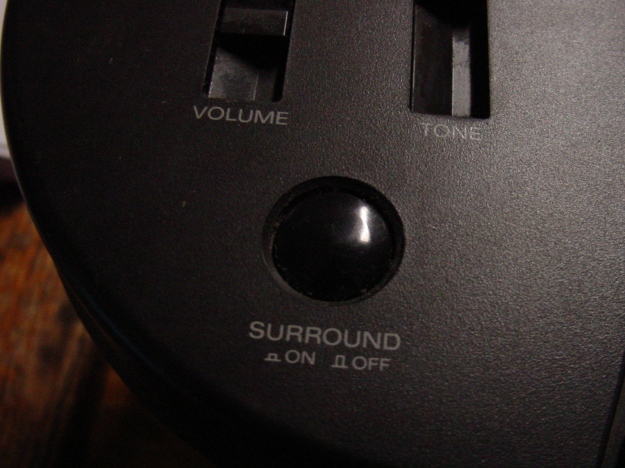 So, how about the surround sound? Upon pressing the button, I expected to have the sound blast me in the face not unlike that old Maxell advertisement, but much to my chagrin, it only made things slightly louder. I have no knowledge of the inner workings of something of this nature, so I’m just guessing that when it’s not on, the speakers are simply not used to their fullest. When it is on, they are. How’s that for deductive reasonin’! I know, I know, “duh!”

Don’t get me wrong, though. This unit has very nice sound for the portable nature & time it came out, and I guess it can be room-filling if you turn the surround sound on and crank the volume & tone dials waaay up, but don’t go in expecting a high end set-up, okay? 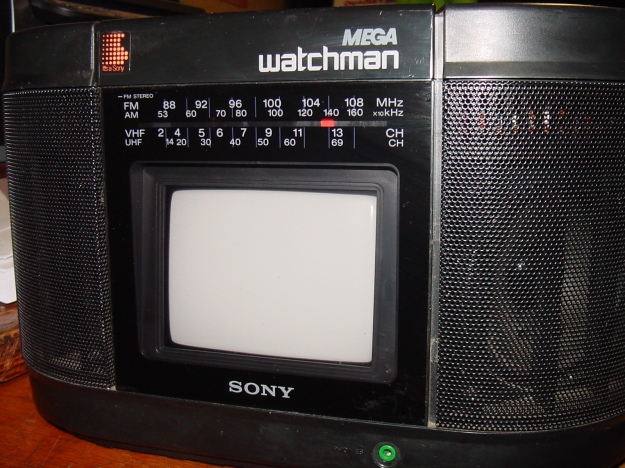 There it is, my Sony Mega Watchman FD-555, from August 1991. It’s a very cool piece of old school electronics. Sure, it doesn’t come off all that impressive nowadays, but back then, this was assuredly “to the max.” I’m seriously thinking about throwing some batteries in it, grabbing my cassette copy of Don Johnson’s Heartbeat, and going rockin’ down the street with “Love Roulette” blasting at top-volume.