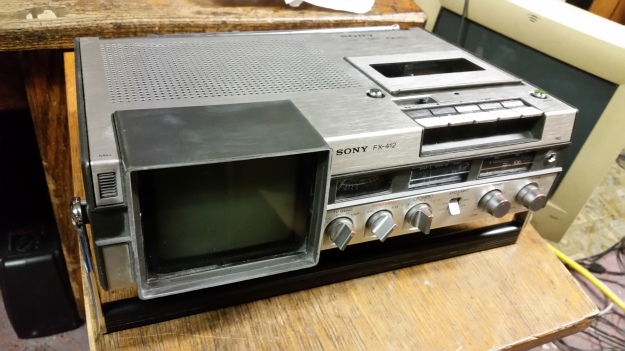 Look, y’all know I loves me some portable TVs. I’ve babbled about them before, and I’m about to babble about them yet again. When it comes to old electronics, these specimens are a severe weakness of mine. If I’m at some thrift shop somewhere, and one of these ancient wonders of ostensible convenience happens to be in the vicinity, there’s a better-than-good chance it’s coming home with me (provided it’s priced at somewhere around reasonable, because even I have my limits). I love portable/handheld/whatever TVs.

In this regard, fate has been good to me as of late. Little itty bitty Panasonic Travelvision from 1982? Became mine for $5 at a thrift store. A new-in-the-box Realistic handheld TV from 1989? Also became mine for $5, this time at a yard sale (I was gonna buy it anyway, but I felt especially obligated after using the box to smack away an attacking bumblebee that was intent on killing me for no reason). And just last week, I found an ’89 Sony Mega Watchman for $4, and even with a bit-too-corroded battery compartment, I still couldn’t resist.

But when it comes to sheer coolness, none of those can compare to this beast of a machine: the Sony FX-412! It’s a TV! It’s an AM/FM radio! It’s a cassette player and recorder! And it’s from February 1979! 36 gol derned years old! And how much did it set me back? Three big bucks, that’s how much! Cool winnins!

The design of the unit is decidedly heavy-duty, and despite the early-1979 date on it (which obviously means it’s 1978 technology, at least), I initially mistook it for something from the 1980s. Given the look and size of the machine, I could easily see it being released as-is in 1983/1984 and not seeming too out of place.

It’s certainly a bulky fella, and it’s made all the more unwieldy with a big carrying-handle that doubles as a stand, but given all that it does, it’s really not too far off, size-wise, from similar units that would be released in the following decade. It’s big, but not unacceptably huge. Perfect for camping, bedroom desks, or a shelf in the garage.

And that silver finish? I don’t care what anyone says, it still looks darn classy!

I have no idea how much the FX-412 cost originally, but given the number of features, portable size, and solid construction, I’m guessing it probably wasn’t cheap.

On the back: a jack for an external antenna, plus knobs for the vertical hold, brightness, and whatnot. This is all to be expected.  I was hoping for an RF input, so I could hook up my Atari 7800 and play Double Dragon on it, if for no other reason than it would make a sweet post-closing-picture, but no go. There’s probably a way to get it running via the external antenna jack, but I’m not feeling adventurous enough today to even try figuring that out. 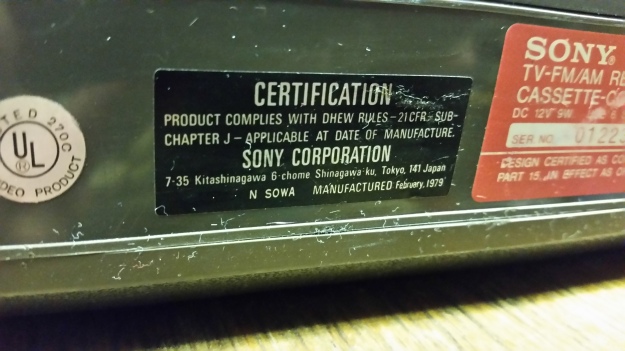 See, manufactured in February 1979. Did you think I was lying? I wasn’t. My pictures may say otherwise, but this is actually a pretty clean unit. The lint is just leftover from what I used to give the FX-412 a quick wipe down. The super high-resolution of my cellphone camera actually makes things look worse than they really are. To the naked eye, this is a nice-lookin’ machine!

Aside from the expected scratches and whatnot that come with age, the FX-412 is really in pretty good condition. The only exceptions? Part of the antenna has been lost to time, and the AFC/LIGHT switch appears to be broken. Not ideal, but I can live with it, especially for only $3.

On the right side: the TV and radio tuning knobs, which, obviously, do just as you would expect them to. Really, what else can I say about them? They’re how you change the channels, man!

On the left side: inputs for a remote microphone and DC adapter. Since this isn’t just a cassette player but also a cassette recorder, the option for a mic is basically a prerequisite. As for the DC adapter, this TV didn’t come with one, and while I briefly considered finding a replacement, either here or abroad, the memories of the time I fried an Atari jaguar eventually had me deciding against it.

(That’s not a joke, either; years and years ago, I found an Atari Jaguar for waaaaay cheap at a thrift store, but it didn’t have an adapter with it. Well, I dug through the series of adapters I had lying around at home, and the one that caused a popping sound and smoke to emit from the console let me know that I had chosen unwisely. Needless to say, I wasn’t all that pleased with the results. However, I later found another, connections-complete Jag, also for pretty cheap, and that’s the one in my collection to this day. Say what you want about the rest of the Jag’s library, but man, Wolfenstein 3D is unbelievably good on there.)

In lieu of tempting fate by plugging in a non-official Sony FX-412 adapter, I opted for the required six big giant D batteries when it came to testing. Pleasant surprise: the battery compartment was very clean, which, when it comes to things like this, isn’t always the case. Indeed, only the gooey, steadily shredding adhesive on the inside of the battery compartment-door marred the otherwise clean appearance of the space. Heck, that ain’t nothin’.

I have no idea what the battery life of the FX-412 is, but prior experience with portable TVs tells me it’s probably a battery-sucker. I’ve related this story before, but years ago, I took my portable Bentley TV with me camping. As I recall, it had brand-new batteries in it, and the only time I really used it was to watch Terminator 2 on Big Chuck & Lil’ John. By the end of the broadcast, the batteries were so drained that sound was non-existent. So, what, three hours of life, maybe?

Granted, that was a cheap Bentley TV that they used to give out free with RVs and such. This TV, however, is a heavy-duty Sony. I really wouldn’t be surprised if it had significantly better battery life. Or not, I don’t know.

While being in reasonably good shape for something 36 years old, the broken antenna and AFC switch left me just a bit apprehensive. But as it turned out, the TV and radio both work fine. The functionality of the radio is a given, though of course I’m not pulling in any actual channels on the TV portion; since the option for an external antenna is there, and I have indeed seen people (online) get life out of older TVs such as this here in the digital age. I’m not going to go that far, because honestly, it’s not like I’d be using this thing all that often even if everything wasn’t digital nowadays. But it’s sure nice to know that I could.

Honestly, the only real doubts I had for the unit were as to whether the cassette player would work or not. Of the many, many TVs and radios I’ve garnered over the years, the vast majority have worked just fine. Cassette players though, those can be kinda spotty. Age, moving parts, and audio heads (that may or may not be shot), they don’t always work together harmoniously here in 2015.

So, out came my trusty cassette copy of Bruce Springsteen’s The River, and in it went. Play was pressed, and… 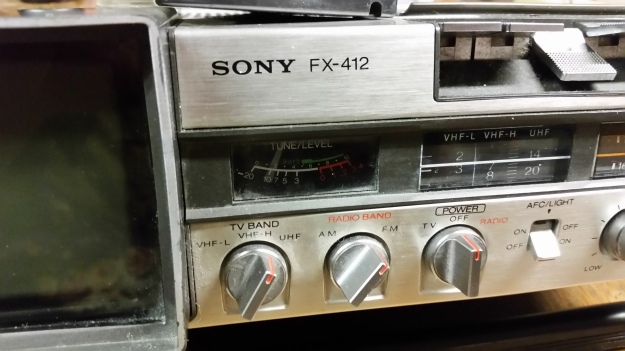 Believe it or not, the cassette player also works! Once again, Bruce fails to, erm, fail me. It sounds a little (just a little) wobbly, but at 36 years old (and being a portable machine to boot), I didn’t expect hi-fidelity anyway. I could easily listen to the whole album on this thing and be satisfied (and who knows when the cassette player was last actually run; a little playtime may be all it needs to get itself back in shape).

I can’t tell you how much I love the fact the FX-412 actually has an audio meter, and it also still works. I tried to get a picture of the meter in action to demonstrate that the cassette was indeed playing. You shoulda seen the lil’ guy jumpin’ around to “The Ties That Bind,” fella was groovin’! 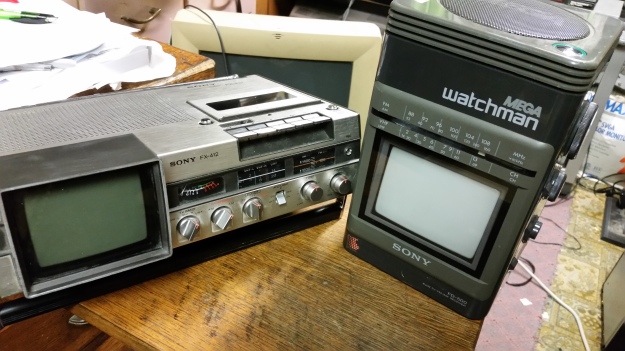 Just for fun: here’s the FX-412 next to the 1989 Mega Watchman I mentioned at the start of this post. The Watchman is bulky in its own special way, though it lacks the capability of playing/recording cassettes. Aside from the same manufacturer and same portable-entertainment-center-motif, there’s not a whole lot all that’s comparable between the two. But, it is interesting (to me, at least) to see how far Sony progressed in the 10 years since the FX-412 was released. Granted, this Watchman was just one in a whole line of similar TVs, so what am I even going on about again?

I like portable Sony TVs, is what I’m trying to say. 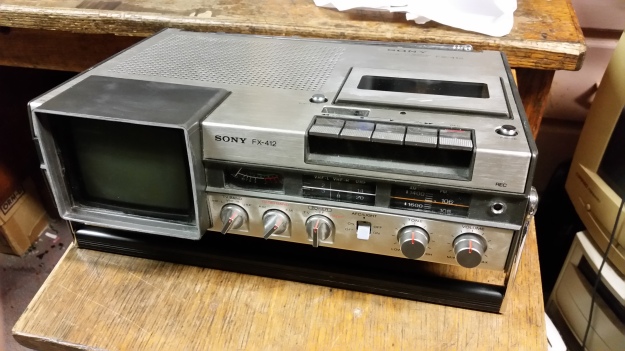 This is one of coolest electronics finds I’ve had in quite awhile. Besides being a sucker for portable TVs in general, I have a strong affinity for Sony products. So yeah, this is a winner. There’s a few imperfections, sure, and it’s more of a display piece than anything for me, but for only $3, I’ll happily add it to my collection. The Sony FX-412 is shining example of just why I keep such regular tabs on my local ‘haunts.’ Finds like this don’t come everyday, but when they do, they certainly make the “dry” trips worth the return visits.