Welcome to October! Fall! Halloween month!! I essentially took September off so I could get one ostensibly-spooky post up per week. Or at least that was the plan; who knows if it’ll actually work out that way. If nothing else, I’ve got the start and end of the month covered, okay? Stop pressuring me.

To kick things off, I’ve got the return of Goldstar Video’s Tales of Horror series, a 1991/1992 line of budget tapes that, thanks to their extreme early-90s vibes and cool packaging, I have become fond of. We saw their version of 1947’s Scared to Death back in August, but today we have one that just may be my favorite of their line-up: 1942’s Bowery at Midnight.

It’s not because of the packaging, or a particularly unique print of the movie, either; the cover art for all of these was pretty similar, and as for the print, well, I don’t really know, because the tape is sealed and I refuse to open it and ruin the minty freshness. Nope, this is a biggie for me because I just really, really love this movie. It stars Bela Lugosi, so it’s automatically worth checking out anyway, but then it goes one better by having a genuinely engrossing plot. It’s a Monogram production, so the story ain’t exactly high art, but boy did it turn out to be a good flick anyway.

No joke, when it comes to Lugosi, I’m definitely a fan. Sure, Dracula, that’s an easy call. But, because Bela spent so much time on the poverty row circuit after Drac typecast him somethin’ awful, it’s a lot of those cheapie movies from the 1940s that I come to first when I think Lugosi. The Devil Bat? Great flick! The Corpse Vanishes? That too. And amongst those personal vaunted ranks: Uh, Bowery at Midnight, obviously. And don’t think that just because these were quick paychecks for him that his performances suffered; Bela always gave a role his all. 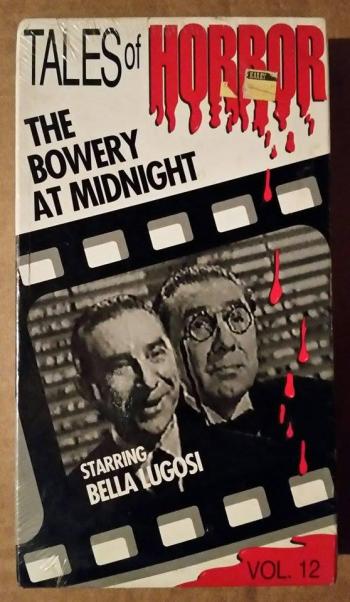 Because it’s long been in the public domain, Bowery at Midnight has had more than a few budget VHS, and now DVD, releases. It’s not one of his more ubiquitous films to be found in this arena though, and that’s a shame, because as far as I’m concerned it’s one of his best cheapies.

The cover art here follows the same template as all of Goldstar’s Tales of Horror entries. That is, white background, accented by a series title that’s dripping blood, a grainy filmstrip screenshot of the movie down the middle, and a volume number at the bottom-right (which is housed in a pool of the blood). This was the set template for the line, with only the specifics changing (movie title, volume number) changing from release to release.

This particular entry was volume 12, of which there were at least, at least 24 volumes. Anyone know exactly how many were released? The screenshot used actually isn’t a single still taken from the movie, but rather a composite; Bela plays a dual-role in the flick, as a college professor by day, nefarious soup kitchen operator by night, and both personas were aptly placed into the scene. Good move on Goldstar’s part!

The only thing I really find suspect here is the misspelling of Bela as “Bella” on the packaging. Hey, it was a budget video, typos happen, but it’s not like his name isn’t at the start of the movie, and besides, they got the spelling right on the Scared to Death cover. (In Goldstar’s defense, I’ve seen this misspelling from other manufacturers, as well.) Oh, and it’s Bowery at Midnight, no The, but that’s small potatoes, yo.

(Also, dig the remnants of a Kash n’ Karry sticker on the front! This tape hailed from a Florida seller, and there’s the proof!)

The synopsis on the back isn’t bad. Bowery at Midnight is, for the most part, more of a

crime thriller, though Goldstar did well to point out the legit, albeit somewhat inexplicable, horror twist. Though, referring to Bela as the “night manager” of the mission is, uh, no. He owns and runs the joint; he’s not some underpaid clerk at an all-night convenience store somewhere! “Let me get you your lottery tickets, my friend…” Also, his offing of (most) of the people he enlists isn’t so much because he’s threatened by them as it is a precautionary measure.

I’m not trying to rag on Goldstar’s summary, though; compared to many budget labels and the synopsis on the back sleeve (if there even was a synopsis), this is practically a cornucopia of information!

Plus: 1992 – a 25 year old tape! The sad fact of the matter is that’s a bit newer than much of the stuff I bring home, VHS-wise. I don’t know when any of these were released (the line apparently started in 1991, and I would guess the tapes continuously floated around for a few years afterward), but I’m assuming they were more readily available during the fall months, in which case I was 6 years old for Halloween ’92. Can’t remember what I went as that year, but there’s a good chance it included a mask I couldn’t stand wearing for longer than 12 seconds.

I didn’t have any of these tapes as a child. I was more into cartoons and video games at the time; my love of vintage horror and sci-fi would flourish about 5 years later.

Fun Fact: Freehold, New Jersey was the childhood home of Bruce Springsteen. Also, the Grampa tapes were manufactured in Rahway, NJ. So, was Jersey like the unofficial capital of low-cost VHS or something?

(Yes, I totally used that exact paragraph in my Scared to Death review. You can’t improve on perfection, so I’ve straight-up copied and pasted it here. Stop pressuring me.)

As I said, I can’t bring myself to crack the seal on this. It’s just too cool having it new; I could set up a little rack in my house and continuously pretend I’m at a grocery store circa-1992, if I wanted to be as arbitrary as humanly possible. If my Scared to Death is any indication, this is probably recorded in EP, and the label probably implores you adjust the tracking as needed. And boy was it needed with Scared to Death. (Though in all fairness, I ran that through an old beater VCR, so the fault may very well have been more on my part.)

Bowery at Midnight. Why do I like this movie so much? Besides an undying affinity for poverty row horror of the 1930s and 1940s, and my Lugosi fandom, it’s just a genuinely good movie. I gave it a cursory glance for the first time only a few years ago, admittedly without much enthusiasm, and yet, quickly found myself positively engrossed in it.

It’s also a solid example of 1942 wartime matinee entertainment. It just feels like something that could have come out in the early-1940s, though I’d be hard-pressed to fully explain that feeling. Maybe it’s the fast pace (there’s only a little over an hour to work with here) and dark-yet-also-kinda-wacky plot. Furthermore, I love the NYC setting of the film (though I have no idea if it was actually filmed there or not). I guess what I’m haphazardly getting at is this is a real time-capsule of poverty row cinema, though I guess poverty row cinema is a time-capsule in and of itself, huh? I totally lost where I was going with this paragraph.

With Monogram at the helm and “Bowery” in the title, it’s impossible to not think of the East Side Kids, which truth be told, was initially what I took this for. Bela did two of those, but in my opinion, this is so, so much better  – though aside from the studio and setting and star, there isn’t much comparable between the two (or three). Like I said, Bowery is primarily a crime thriller, but with a random horror twist.

Brief plot rundown: By day, Bela is a mild-mannered college professor. By night, he’s a criminal mastermind using his Bowery-based soup kitchen as a front. He likes to enlist patrons of the kitchen for his robberies, and then off them before they can get too comfortable in their positions. He also has a wacky-jack scientist living in the basement of the soup kitchen, who requires corpses for his experiments, so it’s a win-win for him, even if Bela don’t give him no respect. Add to it a kind volunteer at the mission, her nosey boyfriend (who happens to be one of Bela’s college students), a just-promoted cop, some comic-relief bums, and an ending that’s too head-scratching to not love, and you’ve got a really fun hour or so of entertainment.

The film briefly hints at Bela actually having a legit split-personality, though it never really goes anywhere with the idea. The “daytime professor” plot element as a whole is kinda undercooked too, though with only 60+ minutes to play with, the movie made the wise choice of mainly focusing on the mission.

I really do love this flick, and to have it in this early-1990s, budget VHS form, it just seems so perfect. These Tales of Horror tapes have a very Halloween-ish look and feel to them; they seem like the kind of thing consumers would be stumbling upon not only at video stores but also supermarkets and the like come the fall months.

Needless to say, these Tales of Horror tapes are all way, way out of print, and as mentioned, somewhat obscure in this day and age, though none of them command very much. Not that I’ve seen, anyway. That’s not to say you can’t get your Bowery at Midnight on, though; it’s public domain, so there’s no shortage of options out there, though the best I’ve seen is the terrific Roan DVD.

And so, with that, the post comes to a close and Halloween month has been kicked off here at my stupid dumb blog. Stay tuned, more ostensibly-spooky stuff to come! Hopefully.