Friends, I come to you today with not only a stop-gap post, nor only a desire to fill an ostensible gap in internet-land, but also with a request for further information. I’m only one person; by myself I can only do so much. But together, we can do…something.

Here’s the backstory: a few years ago, I was traipsing through Dollar General, and while I don’t remember the other particulars of the visit, I imagine I probably got annoyed with people being in my way as I tried to pass down an aisle, as if they were purposely inhibiting me and didn’t have the right to shop. A reasonable annoyance or terrible fault on my part? You decide!

Anyway, I always make two stops at DG: 1) At least a cursory glance at their DVD section, and 2) a look at their toy aisle. Now, when I’ve looked at action figures and such on this site in the past, I’ve mentioned that I’m not really a full-fledged “toy guy.” And for the most part, that’s still true; when it comes to new action figures and the like, I generally don’t care. Though there have been exceptions, my eyes tend to figuratively glaze over when confronted with whatever new product has been foisted on the youth of America.

HOWEVER, in two specific areas, I guess I am a pretty big toy guy. First off, I’m a total sucker for vintage toys, which normally means anything 1994 or before to me, though the late-90s are now getting old enough (!) that I’ve found my interest growing in pre-2000 items. Some of that is nostalgia on my part, since we’re now at 20 years (!!) since the 1990s neared an end. Intellectually, I know that stuff is now “old,” even if it doesn’t feel that way to me emotionally. It’s a little depressing if I allow myself to think too long about it.

ALSO, and we’ve seen this (more than once), I love the budget toys. In look and build quality, some of them recall the ‘real’ toys I had in my formative years, but even when they don’t, they can display a real quirky charm and/or level of interest that I just don’t get from the (relatively) big budget items of today. The fact that they’re cheaper and I’m almost perpetually short of money certainly helps, too.

It’s in the latter category that our subject today falls… 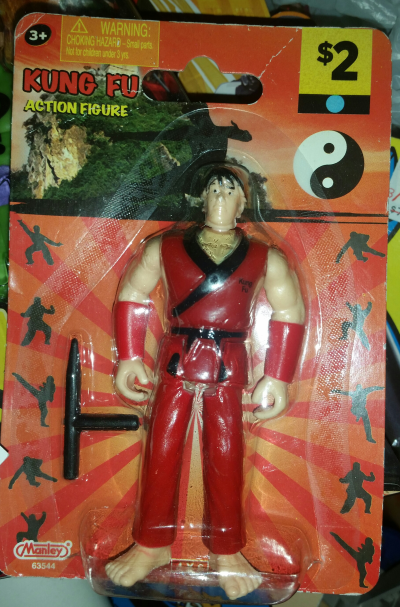 As I sauntered throughout DG that night, the regular toy aisle, near as I can recall, left me empty handed. But, as I walked down the main aisle, my eyes fell upon something laying on one of the end caps, something that didn’t belong with whatever foodstuff they had been designated to showcase. Oh no, this was quite a bit cooler, and it’s what you’re seeing to your left at this very moment.

I refer to him as “Kung Fu Guy,” though his official moniker is “Kung Fu Action Figure.” Regardless of name, I was immediately enamored by this figure, from the build quality, to the eye-catchin’ red clothing, to the simple fact that I would have loved this figure when I was a kid (I was and am a pushover for kung fu/karate/ninja action figures). From first glance there was little doubt that this thing was coming home with me.

It must be noted that I hadn’t seen this figure before prior, and I haven’t seen it again since. Once, some guy in a Facebook group told me had one, but that’s the first and last I’ve heard on the subject from outside sources. Where did it come from? How did it get there? How old is it? As you can see, the card is a little beat up, and my hypothesis is that it had slipped behind a rack or box or something sometime beforehand, only to later be unearthed by a worker or perhaps even a random customer. Maybe some kid found it buried somewhere in the store and carried it around before their Karen of a mom made them leave it behind. Had I had more foresight, I could have asked to see the security footage of that section of the store, as if I had any right to request such a thing.

OR, maybe they only got a few in and this was the last one. Like I said, I saw no others before or since, but that doesn’t mean they weren’t there; only that I missed them. (Though, figures like this really are the kind of things I tend to notice.)

I refuse to remove Kung Fu Guy from his protective packaging. On the contrary; I’d like to have him AFA graded. Not because I think it’ll automatically give me a big time meal ticket collectible item, but rather because I sometimes like to be as superfluous as possible. The only thing stopping me? Frankly, uh, money. I just don’t have the spare bucks to be so recklessly arbitrary.

Because Kung Fu Guy remains ensconced in his paper & plastic prison, I can only surmise as to his build quality. Though you may be tempted to think otherwise after looking at the neck-joint in the picture above, the figure sure seems to be reasonably solidly built. Since I didn’t open it, it’s really only a gut feeling on my part, but the figure comes across to me as something akin to what you and I and Johnny-runs-his-mouth over there would have gotten back in the 1980s or early-90s. Not just in construction, but in general looks as well. That is most definitely a good thing.

KFG comes with five points of articulation, arms, legs and head, as well as a single accessory, some kind of ostensibly-appropriate nightstick. I don’t know what it’s called! What I do know is that KFG’s deadliest weapon isn’t his fists or feet or baton, but his mind.

Also, look close; they put “Kung Fu” on his chest, as if a descriptive term was really necessary. I so love that. Is that a thing, labeling yourself with your occupation? Or maybe KFG’s parents literally named him that, as if to say “you’re only getting one career choice in life!” I like the idea of whatever dojo this guy belongs to insisting that all members wear name tags like they were gas station attendants or something. “Hi, my name is Kung Fu and I’ll be pummeling you today!”

Kung Fu Action Figure was manufactured by Manley, an aspect that caused me to reword the title of this post accordingly, lest some hapless reader think I was referring to the masculinity of the toy. That would have been spelled “manly,” and while I’m sure KFG is plenty manly (he’d kinda have to be, right?), we’re talking about Manley here. I’m assuming this is the same company, in which case they’ve been around since 1987 and are based in Hong Kong, which is appropriate for several reasons.

Online searches revealed a few toys sharing the same company logo seen here and reaching back to the 1990s (the best example I found was this 1997 wrestling figure), so Manley does go back a ways. Indeed, that’s why I mentioned “vintage” in the title of this post, albeit without definitively concluding so. The “3+” in the upper-left hand corner of the card seems, to me, to point to a product of the 2000s, but everything else about it, from the look and build of the figure to the card it’s on, tells my gut it’s older, late-90s or before.

I have zero proof of that of course, and I could very well be wrong; the fact I found it when I did seems to naturally declare that I am wrong. But then, just a few years ago, I found a whole load of recordable VHS tapes, and even a Betamax tape, at a Marc’s grocery store for 39 cents apiece. These weren’t new old stock tapes either, that would have been kinda understandable. But no, these were used tapes. As in, stuff was already recorded on ’em. I have no idea what the catalyst behind stocking these was, and it’s the only time I saw the store do that, but my point is that an older toy such as KFG showing up at a bigger chain store in this day and age isn’t totally unreasonable. Quite a bit less random than all those video tapes showing up at a Marc’s, anyway.

And that brings me back to the request I alluded to in the intro of this update. I’d really like to know more about this figure! I can’t find anything about it online, so if anyone has one or remembers them, please, hit up the comments with some info! When were these figures around? Were there others in the line? Were there uniform color variants? (White, blue and/or black attired versions would have been pretty rad.) These burning questions must be answered! I won’t rest until they are!

Well, I will rest; it’s not like this stuff needs to be keeping me up at night. I’ve got far bigger problems that take care of that. Still, it’d be nice to know.